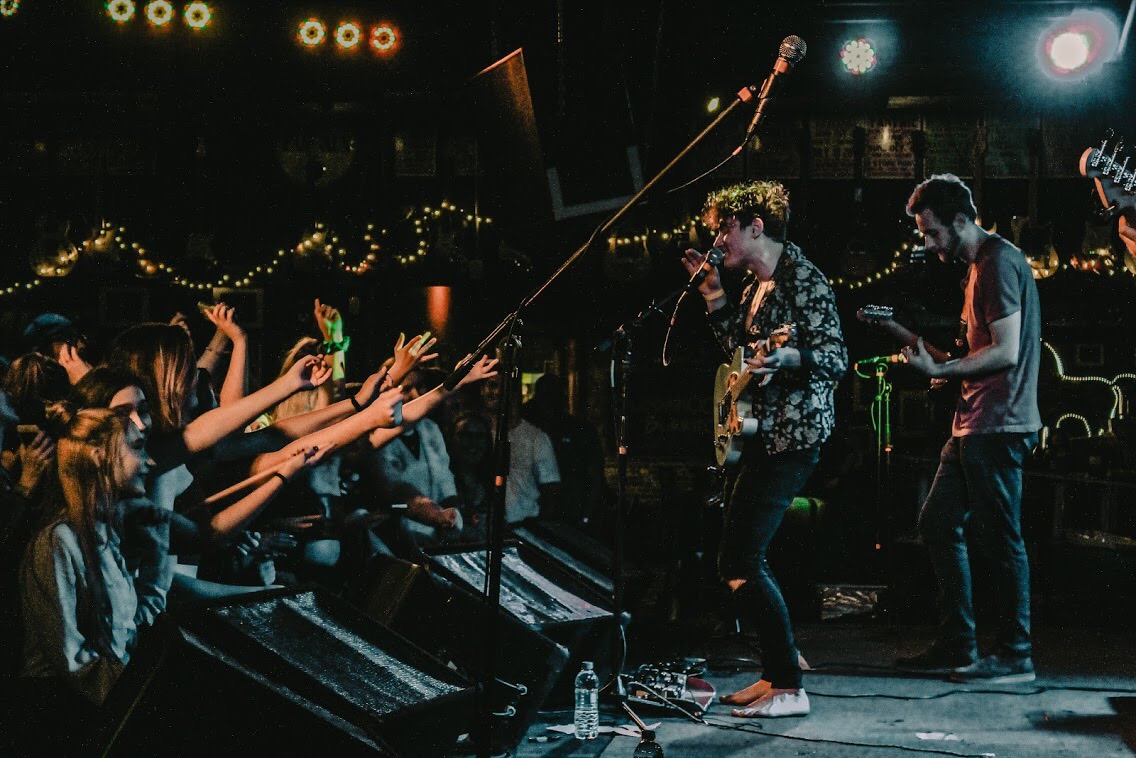 Shoobies is an indie-rock band hailing from Bayville, NJ. The band consists of Casey Marley Breidenbach (vocals/guitar), Brandon “Beef” Page (drums), Dylan Bailey (bass), and Kevin Miller (guitar). The infectiously energetic boys of Shoobies are all in their early-twenties, which makes their music particularly relatable for people of that age-group. Their dedicated group of local fans has now spread to an international audience, with over 6,000 monthly listeners on Spotify.

The music of Shoobies began as two EPs, titled Claude Monet and Cherry. The former soothes like indie love, and the latter punches like sex, drugs, and rock and roll. Preceding the official EPs, the acoustic demo Dear June was released in 2016, which I find to be criminally underrated by its creators. (Dear Shoobs, please never remove it from any streaming platform ever again, thank you.) When the individual releases are pieced together as a whole, it is evident that the music tells a transcendent story of love and loss.

To continue this story, the third Shoobies EP, Mocean, has just been released. According to the band’s website, the mood behind this work is “a halfway happy.” Despite scatterings of angst throughout the lyrics, the music presents itself with a breezy nonchalance. Mocean is a sonic summer, transporting its listeners to a state of beachy bliss. The cover art’s wave, whether a purposeful decision or a happy coincidence, evokes the image of a yin-yang, instantly indicating that Mocean will serve as a balance for the band’s growing catalogue.

If you’re still hesitant about adding the up-and-coming group to your summer playlist, Casey is here to tell you what to expect from their new music!

Regarding Mocean’s general concept, Casey said, “The EP relates to Thales and the idea that life is water – it’s a constant flux. It’s also a metaphorical take on us as a band, since we’re putting ourselves in motion for bigger things to happen.”

Casey describes the recording process for this EP as “flowy and melody-based.” Talking about the goal behind this release, he said, “We want this to convey a lot of emotion and tie together the sounds of our previous EPs to create one concise sound.”

He then broke down each track:

“‘Peachy’ is an existentialist take on a sort of love that creates a noose-like grip around someone’s neck.

The girl that this guy loves is free and has nothing tying her down to reality. She belongs to the universe and is no one else’s property. There’s a lyric where the guy tells her, ‘You’re more than just a friend.’ She responds, ‘Save yourself, just pretend.’

This track is based on their philosophies rather than their realities. His reason for having no emotional ties is that he is a nihilist, and her reason is that she’s just peachy; she’s free and he’s imprisoned.”

You need to close your eyes when you listen to this song… allow it to really move through you. It’s like a soft wave crashing over you, again and again.

The true beauty of Shoobies is that there are always lyrical gems like this one throughout their EPs. We’re going to use the word “dogmatic” in something that sounds like a love song, but isn’t really a typical love song at all? Yep! And I am here for it.

I’m digging this image so much that the extent of my admiration cannot even be expressed. This girl is edgy and graceful all at once, and I think that we could all use a little more of her “just peachy” attitude. All hail Erica.

“In this track, he adopts her philosophies and stops brooding. He realizes that now that he doesn’t need her, he has become more appealing to others.

It is a transition from depression to manic, showing that both are equally as empty. He has loved and lost and she has never had anyone or anything, but they both feel alienated.”

Imagine this: you spent the day at the beach with your friends, your skin has a little sunburn that you know is going to peel and look ugly later, you take a shower to revive yourself (why does your skin look even redder in the shower?!), and now you’re going out. You’re at a Shoobies concert, and they start to play this song. You’re still a little tired from the beach and your energy isn’t what it would normally be, but let’s be honest, you’ve already had a couple drinks. This song JAMS. You start dancing like a maniac, not caring who’s watching you, and you get a little glimpse of euphoria.

First, the oomph behind Casey’s vocals when he sings this line? Magic. Second, I think this should be printed on merch immediately.

The EP is available everywhere now. It’s only 2 tracks long, which will take up less than 10 minutes of your day… if you hate it. If you love it, it’ll take up a TON of minutes for the rest of your summer because realistically, both tracks are bops and you’re going to want them on repeat. Grab your best friend, go for a late-night drive, roll those windows down, play this EP loud, and thank me later.

Looking to the future of the band, and what he hopes to achieve, Casey said, “If someone else can find solace in something I wrote, that’s purpose.”

P.S. Check out their website, shoobiesnj.com, for information on their inevitable debut album and future tour dates!

I’m not sure how to begin, so first I’ll say that it’s very nice of you to stop by. Thank you for taking the time to read these words. This space is yours just as much as it is mine, and I hope that it brings some light to your day.

I may post some words of advice from time to time, but I’ll provide this disclaimer now: I’m basically a female Chandler Bing. Have I really figured anything out? No, and my wish is to always be a little confused. I love being a student. I’m endlessly learning and growing, and the glowing comes with the love that I’ve found along the way.

This site is here to help you unwind amid whatever chaos you may be facing. I will regularly post whatever has made me smile recently, and then we’ll bask in it together. I tend to not take myself too seriously, so you’re in luck! May the shenanigans ensue.

I’ve included a picture of my hometown’s beach because 1) it’s my happy place, where I find it the easiest to write, and 2) I’m going to do my very best to have hints of summer throughout every word that I share.